As the Commonwealth mourns the death of Queen Elizabeth II, Canada marked her state funeral with a national day of mourning and commemoration in the capital, where she is remembered for her ability to connect with the people, his spirit, his kindness and for his 70 years of service.

A holiday for some, the gloomy day was marked in various ways across the country.

In Ottawa, a national commemoration ceremony was held at Christ Church Cathedral, where Queen Elizabeth was celebrated by former Prime Minister Brian Mulroney and former Governor General Adrienne Clarkson. Both had met Queen Elizabeth II on several occasions and in their speeches offered their recollections of lighthearted moments from those encounters to delighted audiences.

“As someone who had the privilege of having an important relationship with Her Majesty for many years, I can simply say this: she was extremely intelligent. A woman of impeccable judgment. Resolute, selfless, witty, very witty and kind,” Mulroney said. , going on to say that Canada’s successes, which are deeply admired around the world, are in part the product of the system of government chosen by its founders.

“Today our system may seem anachronistic to some. I understand that, but to others…the role of the monarchy, and in particular the irreplaceable role played by Her Majesty Queen Elizabeth II for 70 years, has been absolutely indispensable in our country’s hugely impressive achievements and contributions to peace, prosperity and stability, at home and around the world,” the former prime minister said.

Clarkson reflected on the main points in Canadian history for which the Queen was present and had the crowd laughing when she spoke about the Queen’s declaration that she would never abdicate.

“‘It’s not in our tradition. Although I suppose if I went completely ga-ga, something would have to be done,'” Clarkson recalled telling the Queen. “But she stayed the course until the end. Focused, dedicated, calm, the very essence of equanimity.”

In his tribute to Queen Elizabeth II, Algonquin Spiritual Advisor and Ottawa English Poet Laureate Albert Dumont referred to the “horrors committed against the indigenous peoples of British colonized lands by former monarchs”, while mentioning “his ability to connect emotionally with the common”. people, his desire to make the world cleaner and safer.”

As attendees, including Members of Parliament, dignitaries and members of the diplomatic corps, as well as representatives of various faith communities and charities with which Queen Elizabeth II had a close connection, began to visit at the cathedral, “Amazing Grace” was played. by the Appleby College String Ensemble.

MUSIC A MAIN ELEMENT IN THE SERVICE

Music was an important element throughout the service – which featured a mix of religious and non-religious elements – including hymns and songs, a tribute video montage featuring an original piece composed by the Canadian Armed Forces for the occasion and musical interludes by Canadian artists. .

The Dean of Christ Church Cathedral, Ottawa, Reverend Elizabeth J. Bretzlaff, and the Bishop of the Anglican Diocese of Ottawa, Reverend Shane AD Parker, officiated at the service, and prayers were read by the Canadian Secretary of King Donald Booth and the Chaplain of the Canadian Armed Forces, General Brig. -Gen. Guy Belisle.

Care was taken to display a series of visual elements relating to Her Majesty inside the cathedral, including a framed official portrait of Queen Elizabeth II, her personal folded Canadian flag and two wreaths, one in the name of the people of Canada and the other on behalf of the Government of Canada.

Floral arrangements and bouquets were also placed throughout the church and on the tables containing the condolence books. The flowers included bells from Ireland, thistles for Scotland, leeks for Wales, English roses and maple leaves for Canada.

After a minute of silence in memory of Queen Elizabeth II, the recitation of the royal anthem as well as the national anthem, the ceremony ended with the ringing of the church bells.

This historic occasion brought together hundreds of Canada’s most prominent politicians and civil society members to pay tribute to the longest-reigning monarch.

Attendance at the service was by invitation only, with some 600 guests filling the historically significant space.

“It was important for us as Canadians… to remember her and to thank her,” Rodriguez said on his way to the cathedral when asked if Canada had decided to hold its own events. Monday. “There are a lot of people from across the country who wanted to pay their respects, rightly so I would say, so this is a significant moment.”

The cathedral – a designated heritage property – is where many state funeral services have taken place, and it is here that a memorial service was held for Prince Philip in 2021 and for the Queen Mother in 2002 Queen Elizabeth II also attended worship at the cathedral in 1957 and 1967.

The ceremony followed a memorial parade which began just as events in London were winding down.

In Ottawa, despite the rainy fall weather, hundreds of people gathered along the parade route and in front of screens set up in the Garden of the Provinces and Territories, and in front of Parliament Hill on Wellington Street, to seize the historic opportunity.

“It’s a historic occasion so I took Rebecca out of school and we decided to come down and pay homage to the Queen,” said Virginia Schweitzer, who brought her daughter with her to watch her along. of the parade route.

“It’s part of the story, and it’s important to mark the occasion,” said spectator Julie Brennan. “The Queen has always been an important part of our lives.”

Moving through downtown, the procession began at the Cartier Square Armory, a military training center located next to Ottawa City Hall along the Rideau Canal. Passing the National Aboriginal Veterans Monument and the National War Memorial on Elgin Street, it turned onto Wellington Street before arriving at Christ Church Cathedral. 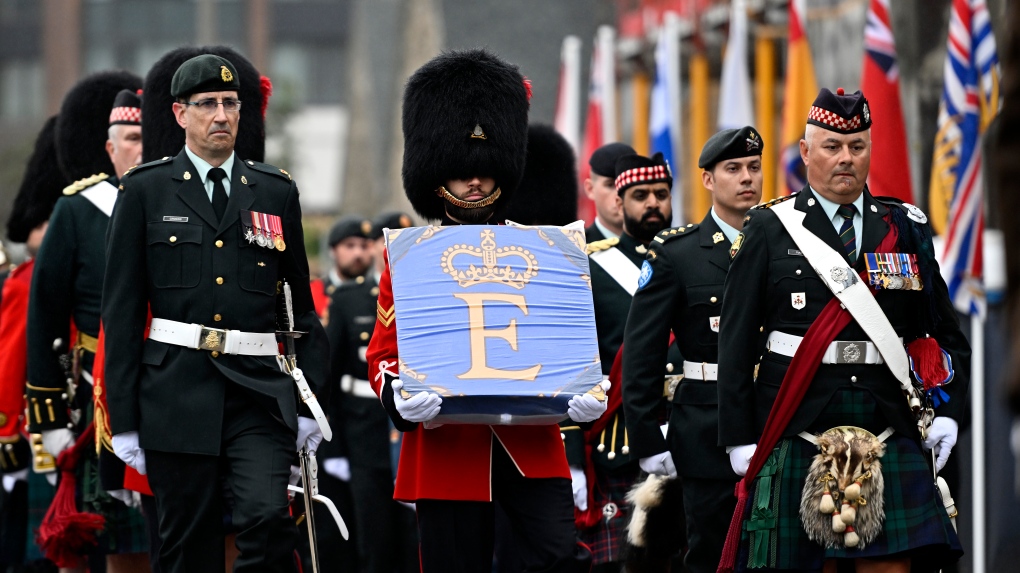 Her Majesty’s personal Canadian flag, wrapped in plastic to protect it from the rain, is carried by a member of the honor guard as Her Majesty Queen Elizabeth’s memorial parade arrives at Christ Church Cathedral for the ceremony National Memorial in Ottawa, Monday, September 19, 2022. THE CANADIAN PRESS/Justin Tang

The parade included two mounted RCMP Musical Ride detachments at the front and rear of the procession, a 100-person military honor guard comprised of navy, army, air force and Special Forces, the Central Band of the Canadian Armed Forces, and as representatives of each of Her Majesty’s 16 military regiments.

A member of the National Sentinel Program carried Her Majesty’s personal Canadian flag.

A 96-gun salute – one shot for each year of Queen Elizabeth II’s life – was fired during the parade from a location west of the city centre.

While there were plans for a flyover of World War II aircraft during the parade and a post-ceremonial flypast of Royal Canadian Air Force CF-18s in the “missing persons formation”, the department of National Defense had to cancel them due to “bad weather”. ”

The Canadian flags that fly at half-mast on all federal buildings and establishments in Canada and abroad, including the Peace Tower, are expected to be raised at sunset on Monday, marking the end of Canada’s official period of mourning. .

Prime Minister Justin Trudeau and Governor General Mary Simon were not present in the capital, as they traveled to London to represent Canada, alongside more than a dozen prominent Canadians, at the funeral of State.

As attention turns to a new era under King Charles III, Trudeau announced Monday that in honor of Queen Elizabeth II’s lifelong commitment to duty and service, Canada will a $20 million donation to the Queen Elizabeth Scholars (QES) program, which funds universities for exchange projects that give Canadian students the opportunity to study abroad.

“Because she was a ruler who had seen all of life’s joys and difficulties, we trusted her messages of hope – that tomorrow can and will be better. As we say goodbye, we look to tomorrow with the same hope. We look to the weather for There is no doubt that hard work lies ahead of us all, but it is the hard things that make a difference in life,” Simon said in a statement released Monday.

“To our Queen and Head of State, thank you for being an example of duty, service and faith to our nation and the world,” reads this tribute note left with a bouquet of roses outside the Christ Church Cathedral in Ottawa where the Canadians commemoration ceremony takes place today. pic.twitter.com/kgLqQQbQS1